I believe that UIView’s private function: recursiveDescription is an application of DFS and I’ll attempt to re-create it with that assumption.

I’m going to walk through a brief recap of Graphs, Adjacency Lists, and DFS. Afterwards, I’ll use this as the foundation for reverse engineering recursiveDescription.

This is a directed graph that consists of six (6) vertices and five (5) edges.

An adjacency list is a collection of neighbouring vertices relative to a given vertex.

For the graph in Figure 1, We would say that vertex B and vertex C are adjacent to vertex A.

The rest of vertices and their adjacent vertices are outlined below:

DFS is a traversal algorithm that: starts at the root (topmost vertex) and exhaust all the branches of one neighbour before repeating for the next neighbour.

Given the graph from Figure 1, we would do these steps following the algorithm:

This can be better visualized as:

Let’s look at how we could implement DFS in Swift. First, we need to model a single vertex. One way could look like:

Using this model, there are three things to highlight with the following implementation of DFS:

Steps 1. to 6. will repeat until we’ve exhausted all the vertices in the graph. The output would look like this:

Another way we could implement DFS is using a stack but that’s out of scope for this post.

Before we can look at recursiveDescription we need to first look at its counterpart description:

description is a property that exists on all Objective-C classes that inherit from NSObject. This property returns a string representation of the object’s contents. This is similar to __str__/__repr__ in Python.

If you ever had to debug something in iOS then you’ve likely called description directly or indirectly. The way the description would typically be called is as follows:

with the following output:

with the following output:

For a pure Swift class (one that does not inherit from NSObject) or struct, you can achieve this via protocols such CustomStringConvertible and CustomDebugStringConvertible.

These protocols could be used as follows:

For a single view, description is often enough but what if you wanted to get information about its view hierarchy? That is where recursiveDescription comes in.

recursiveDescription is a private function on UIView that prints the description of the view and all its subviews (or children views). However, using it is one of those things that’s easier in Objective-C but still possible in Swift. We just have to do some extra steps to get it to work.

Please note that since this a private API it should NOT be shipped in production code. Your app is likely to get rejected from the App Store. For debugging purposes though it should be fine.

We’re going to set up a simple view hierarchy in the below code snippet. This setup is heavily simplified and likely not how you would actually set up a UI since:

The output should look something like this minus the comments // and [...] which is used to truncate the output:

The above output shows each view description along with the description of its subviews indented to represent depth.

The indentation is denoted with a pipe (|) and spaces. You can see that this matches our initial code: view is the parent of scrollView and tableView which are parents of their own subviews.

We can conclude from the above output that the following is happening:

If the above look familiar to you then you’re noticing something very important. These steps follow the same algorithm as the steps in the “Depth First Search” traversal.

It looks like recursiveDescription is using DFS to print out its hierarchy but how can we confirm this without looking at the source code?

Our only option is to attempt to reverse engineer the function. Since we don’t know how it works we have to treat the function as a black box. We can observe what the output is for varying inputs.

Additionally, it’ll help to simplify what we want to print out in our version of recursiveDescription. We’ll change the previous output to ignore the spaces around the pipes (|):

Since the output represents a hierarchy, you might notice it can be represented similarly to the graph in Figure 1 as: 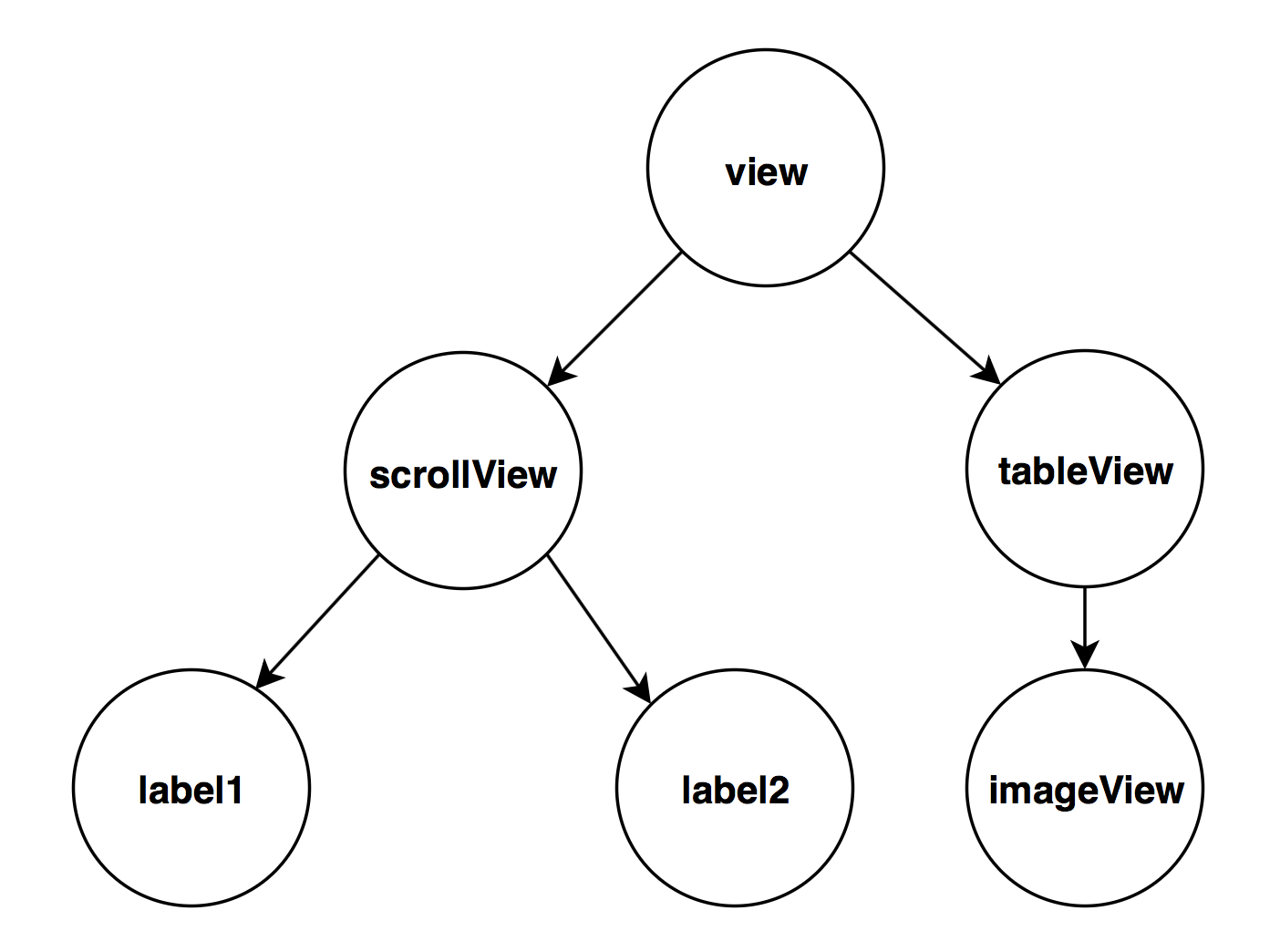 Let’s try to solve the simple case: a hierarchy consisting of a single UIView. If we only have one view then we just need to print out its description.

Let’s test out what happens when we print the recursiveDescription for a single view using our implementation:

However, that isn’t very exciting, is it? If we have a more complex hierarchy then it’ll only ever print the parent view.

We want to be able to print the parent view’s description along with all of its subview descriptions.

We now need a way of iterating through the subviews of a view and we can do that via the UIView property subviews. This property returns an array of the immediate subviews for a given view.

This should remind you of an adjacency list and we can also model the view hierarchy similarly:

Table 2. View and Subviews from Snippet 1

With the ability to get subviews we can update our original recursiveDescription implementation to match a traditional DFS implementation as follows:

This will yield us a result that looks very similar to:

What happened? It looks like we forgot to add new lines to each print.

Let’s replace our line that appends each subview.recursiveDescription() to have a prefixed new-line character (\n).

This is better but there is no indentation representing hierarchy depth.

How do we indicate what level we’re on and how do we get those pipes (|) to display? Since we’re recursively calling our function we can pass down data through a function parameter.

We could extend our function to include a "prefix" parameter and at each level, we’ll pass down what to prepend before each output.

However, since the original implementation of recursiveDescription takes no parameters, we’ll need to create a helper function to handle the prefix passing and recursive nature of this function.

Afterwards, we should expect to see an output like:

Hopefully, you see how DFS could have been used for the real implementation and how we can expand on it from here. I’ve put the final version together for you in this playground.

In this post, we looked at DFS and how a potential application exists in the function recursiveDescription. We also briefly touched on how to reverse engineer a function by treating it as a black box.

I hoped this helped inspire you to look out for some of these famous algorithms in your day to day life. It really helps make the concept stick if you can see a practical application for it.

Let me know if you have any suggestions or questions, I’d really appreciate the feedback.